Let’s start with the definitions of both approaches.

The definition of physiology-based coaching introduces us to charged emotions and charged memories. But what are they? 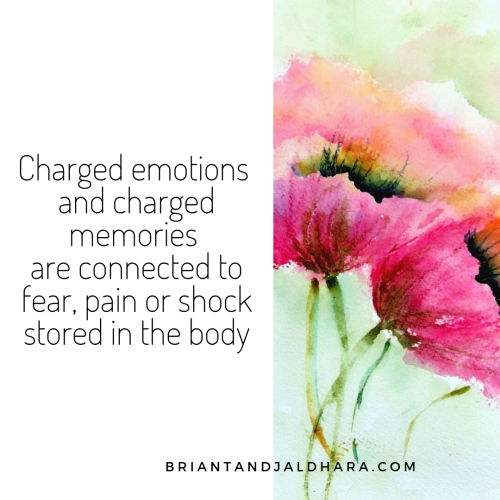 Most charged memories and emotions originate from a situation where the child is overwhelmed by fear, pain or shock. That what is happening is simply too big for the child. Because the child processes what is happening from a child perspective, the interpretation is incomplete or limited. When this child relives the memory and the overwhelming moment as an adult in detail, in a physiology-based coaching session, the adult is now able to put it in full perspective and the body is therefore able to let go of the trauma component.

This very same mechanism is also true for adults who go through a traumatic event, where they are overwhelmed by fear, pain or shock. In adults these charged emotions and memories often show up as PTSD. In children these charged emotions and memories will show up as dysfunctional behavior or even psychiatric disorders. That is why in some people psychiatric disorders only show up or intensify later in life. It often is when the underlying charged emotion and charged memory is triggered by some seemingly unrelated event. 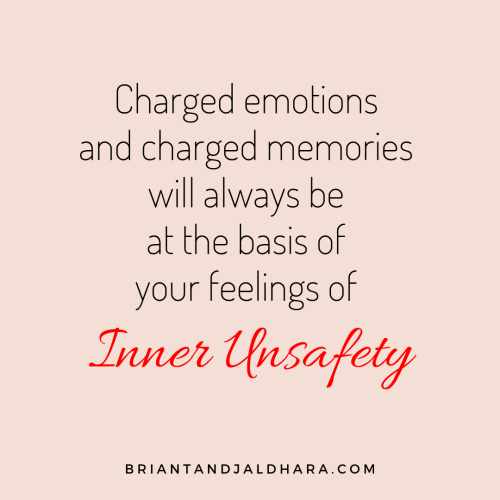 But most of your charged emotions and charged memories have faded into the background by the time you’re an adult and will more or less remain invisible in the undercurrent. And yet, at the same time they will always be at the basis of your feelings of inner unsafety. While the charged emotions and charged memories that are in your foreground will show up as anger, fear, freeze, a need to control, perfectionism, procrastination, obsession, neurosis and many more.

You can also compare these charged emotions and charged memories with land mines that haven’t yet been detonated. In a mine field you know there are mines but you don’t know where they are exactly and how many there are. These mines can lie dormant for years. As long as no one literally steps on them, nothing happens. As soon as someone does, the mine will explode in a split second. No matter how many years it has been dormant, it will detonate! That is why you cannot ignore them. You have to clear the mines and detonate them in a controlled manner in order to be able to live in safety and free of fear.

Until they are triggered by something you experience in the Here and Now. From that moment on you will experience negative body sensations, like tense shoulders and a tense neck, tense jaws, a stone in your stomach, sweaty, panicky, stressed, and you will simultaneously always feel inwardly unsafe and inwardly trapped. And you will continue to be troubled by this as long as the charged emotion or charged memory is activated. To feel inwardly safe and inwardly free again, you must discharge the charged emotion or charged memories. Like the clearing of mines requires trained personnel with specific skills, the discharge of charged emotions and charged memories also require trained coaches with specific skills.

We are often asked: Why is it so important to know the difference between these two coaching approaches and to be able to use them both when the situation requires this? The answer is simple:

If you use coaching methodologies in your practice that are solely based on brain based coaching you will never be able to help a client that is suffering from charged emotions or charged memories.

The brain-based techniques you use might temporarily override them but wont be able to discharge the charged emotions or the charged memory in the long run. That’s why you run the risk of your client relapsing into old, dysfunctional behavior.

There is no right and wrong in both coaching approaches. There is only a difference.

It’s time to take a look at which methods are brain-based and which are physiology-based. I am sure that when you look at the overview, you think: yes but … Yes but, my method also discharges charged emotions and charged memories. Yes but, it is not that black and white. Yes but, I use multiple methods next to eachother…

Yes, it’s not that black and white. Discharging charged emotions and charged memories can seem to happen while using brain-based methods. However … does this happen ‘by accident’ or does it happen ‘on purpose’? Are the charged emotions and charged memories really fully discharged or are they redirected or reframed in a way that they no longer have a negative or dominant influence? If they are ‘only’ reframed or redirected they are not discharged and therefore they might get re-triggered in a later stage. While when they are fully discharged they will be gone forever. 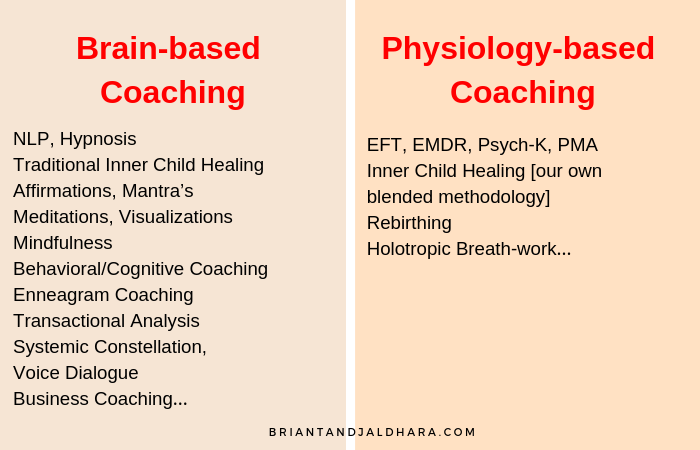 Why does physiology-based coaching have only so few coaching methods listed? If we look at the definition ofthese methods they are almost all labeled as: healing, psychological, psychotherapeutic or therapeutic.

By using these labels many of these methodologies almost immediately seem to belong in the practice of a psychologist or psychiatrist. But is this really true and necessary? What if these methodologies in essence touch something very humane and simple, that can also belong in the coaching practice of a skilled and experienced coach? If this is true we would need to redefine the way we look at coaching and psychology in general.


We, ourselves, work with both brain-based and physiology-based coaching methods. In our coaching practice we have learned how powerful both approaches are on their own and when used together. We now use them in such a way that they optimally complement each other.

Like so many other coaches, we started with brain-based coaching. We always use the methodologies we work with in our own lives, for ourselves too. And brain-based coaching was what we were used to. Until that didn’t work for us any-longer. Our charged physiology was stronger than our mind. We noticed that we didn’t get any further, we just didn’t get the results we needed and wanted. Initially we had no idea how to solve that, all we knew was that we were hitting a ceiling in our own lives and in our coaching practice.

Through research we learned what the impact of charged physiology is in a coaching process. It became loud and clear to us that we needed to work with physiology-based coaching methods aswel to give our clients the result they needed. This was the moment we decided to retrain ourselves.


You can understand inner unsafety mentally (brain-based) but you will feel it in your body (physiology-based). The feeling of inner unsafety manifests itself in body sensations (pinched throat, stone on your stomach, tight neck and shoulders, etc). These body sensations are a result of charged emotions and charged memories originating in your youth when you were between 0-10 years.

As you know by now, these charged emotions and charged memories are stored in the body and must be discharged to be neutralized.

Once the charged emotions and charged memories have been discharged, the transition from inner unsafety to inner safety can and will take place. After the transition, the client will feel inwardly safe (physiology based). Our clients always say that they feel more inner space, and that life literally feels much lighter (physiology based). This often is when true Self-Love enters their lives for the first time.

Our clients also say that with this new reality of more inner freedom and lightness, they more easily set boundaries, they more easily dare to make difficult choices, and they dare to engage in challenging conversations more. They have also gained insight into why they did what they always did and why they do it differently now. And they can now successfully handle brain-based methodologies that they were previously unsuccessful with.

This example shows once again that you can’t deny charged emotions and charged memories. Once they are in the forefront they want and need to be recognized, acknowledged and discharged. As a coach you cannot skip this process.

From a physiology-based viewpoint, we always look at the triggered body sensations of inner unsafety. Where in your body do you feel this bothering feeling? We explicitly invite the client to feel his body sensations. Because the body sensations are the entrance to charged emotions and charged memories (physiology based). And only after they’ve been discharged the client has the emotional space and mental space to take in the clarification of the patterns of the past and the here and now (brain-based). 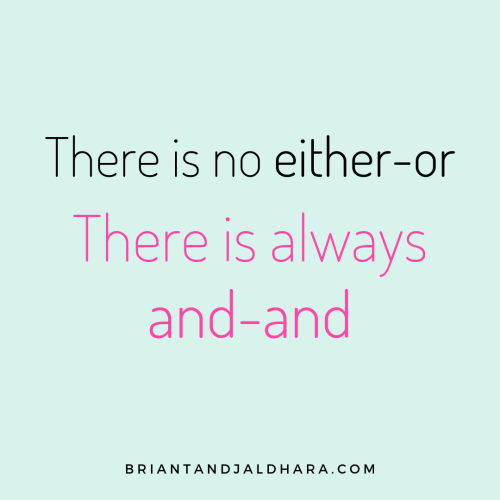 There is no either-or. As far as we are concerned there is always and-and. Why? Because your clients deserve the very best. They deserve a life in which they feel inwardly safe and inwardly free.

We say that as a coach you must be able to explicitly discharge charged emotions and charged memories so that you can use this skill to establish optimal results for your clients. We think that this not only applies for personal coaching but this applies for business coaching as well.

That’s why we are committed to bring the approach of physiology-based coaching 1) to your attention and 2) train you how to use physiology-based coaching so that you can enrich your existing coaching methods with this approach. Because we believe it’s not only important to provide optimal impact and results for your clients, we also believe you should have maximum fun, fulfillment and success in your coaching practice while doing that.

This blog is also available on our podcast channel ‘Coaches & Clients’.

About the author
Briant & Jaldhara
We are Briant [1958] & Jaldhara [1960] both Dutch. We are leaders in Inner Safety. We teach coaches how to Awaken the Power of Inner Safety so they can coach their clients to Inner Freedom & Self-Love
Website
Others also read these

PODCAST #008: Without me this relationship is not complete
12 January 2020

Although I might phrase it differently or use a slightly different terminology, I am in complete agreement with the central thesis of this post! ~Jeroen Terpstra, psychiatrist, https://psychiatrischexpertisecentrum.nu